You are subscribed
Show More

During the early 1880s, the first permanent Slovenian immigrants, of whom, Jožef Turk is considered to be the first, arrived in Cleveland, Ohio. Turk arrived on Oct. 25, 1881 and was followed by approximately 50 Slovenian young men. The primary purpose to immigrate was for economic reasons: Slovenia at that time was a province in the Austro-Hungarian Empire in Europe, and a predominantly agrarian society. The Slovenian community in Cleveland, Ohio grew over the next 10 years and encouraged a young seminarian, Vitus Hribar, to respond to the call to come to America and conclude his studies. He would be ordained and serve the needs of the diocese of Cleveland.
The land was purchased on June 29, 1894 at the corner of Norwood Road and Glass Avenue (now Lausche Avenue) for $6,000. On Oct. 14, 1894, Bp. Hortsmann blessed the cornerstone, and on Nov. 4, 1894, Msgr. Boff consecrated the new small wooden church. At the request of the 65 families and nearly 1,000 single young men, the new church would be named “St. Vitus Church” in honor of the patron saint name of the founding pastor.
The wooden church was expanded in 1902 and a new wooden elementary school was established. This was made possible by the arrival of the Roman Catholic religious women’s order, Sisters of Notre Dame, who responded to the call to be teachers for basic academic subjects of study, including the Slovenian language, from grades one to eight. 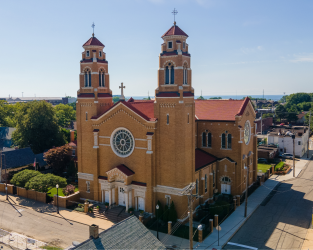 Support your church advertisers
Claim this listing to edit this page.