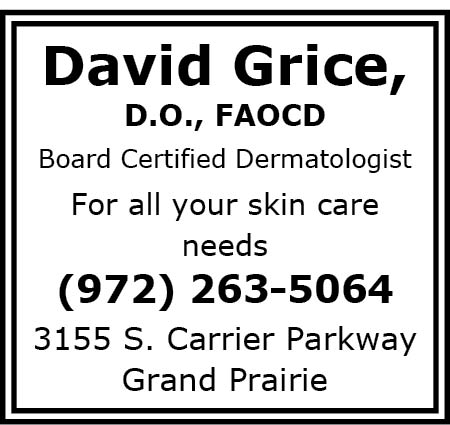 1 Star
By Visitor
I have been seeing Dr. David Grice and Joseph for several years. I have never had a problem with Dr. Grice or Joseph until my husband went to see them for a mole on his right ear. Dr. Grice "froze" it and said it should fall off within a few days. After several weeks it did not fall off and my husband went back and saw Joseph. Joseph took a sample of the mole and sent it off to the lab. The next day we received a call from Joseph that the mole was stage 4 melanoma and he sent my husband to a plastic surgeon for removal of the mole and lymph nodes. Praise God the plastic surgeon got all the melanoma and my husband is doing fine. Because Dr. Grice did not diagnose the melanoma when he first "froze" it, my husband will not be going back to see him. My husband has gone back to see Joseph as required until recently and because of the rudeness and incompetence of the office staff he refuses to even go back to see Joseph.

We have had difficulty dealing with the office staff on many occasions. We are lucky enough to have two insurances and we don't have to pay a copay. Each time we finish our visit with either Dr. Grice or Joseph they insist on collecting a copayment and we have to remind them we have two insurances. When we call to make an appointment they are very rude and say we have to have a referral from our primary doctor. That should be their job to get the referral, not ours. We made our appointments in plenty of time for them to get the referral.

I tried explaining to him the situation and all he was concerned about was my telling his staff to shut up. I told him I called twice yesterday and he said there was no message on my file that I called. He then told me that they were waiting for my insurance company to respond to the request for a prior approval. I asked why the person, Chris, that I left two messages with yesterday didn't tell me that. He said there was no record of my phone calls yesterday and they were busy with patients and could not just stop and answer me. I finally said to forget the prescription and I fired Joseph. I really hate firing Joseph because I liked him but I cannot continue to go to a doctor that the staff is rude and incompetent.

I know this is long but I want people to see that a long time patient is extremely dissatisfied with this office.